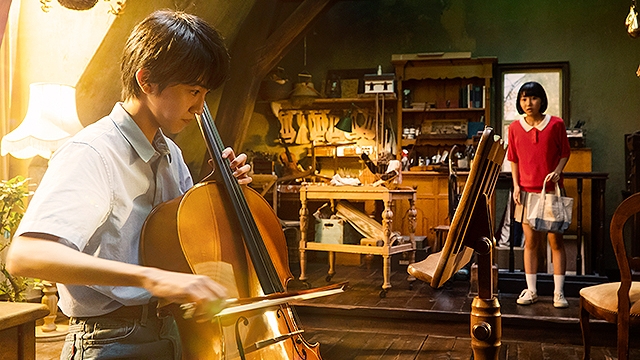 The long-awaited film adaptation from Aoi Hiiragi’s romantic coming-of-age manga Mimi wo Sumaseba / Whisper of the Heart was finally released in 352 theaters across Japan on October 14, then earned a slightly disappointing 109 million yen ($732,400) from 79,000 admissions on its Saturday and Sunday debut to debut at number four. The three-day box office gross from Friday to Sunday was 147 million yen ($987,730) from 108,000 admissions.

Critical reception for the film was less than favorable. It only ranks seventh Filmarks Day One Satisfaction Ranking with an average rating of 3.38/5.0 based on 927 reviews.

The Yuichiro Hirakawa (The promised never-never land live-action movie) The directed film was originally scheduled to be released in Japan on September 18, 2020, but was postponed for two years due to the effect of the COVID-19 pandemic. It is difficult to determine if this two-year delay is one of the factors contributing to this disappointing result.

Toei Animations One Piece Movie Red remained No. 1 at the Japanese box office for an incredible 11 consecutive weekends. The film earned 233 million yen (1.56 million USD) from 168,000 admissions in its 11th weekend, roughly the same figure as the previous weekend. Its total gross in Japan reached 17.1 billion yen (114.8 million USD) for 12.31 million admissions.

Mainly due to the small number of theaters showing the film (43 theaters across Japan), WATATEN! : An angel flew to me : precious friends, the brand new anime feature film adaptation of Nanatsu Mukunoki’s four-panel yuri comic manga, did not appear in the box office top 10. However, the film was well received by audiences, ranking second in Filmarks’ Day One Happiness Ranking with an average rating of 4.04/5.0 based on 68 reviews.

Both To me, the one who loved you and To everyone I’ve loved beforebased on the sci-fi romance novels by Yomoji Otono, quickly disappeared from the top 10 in their second weekend.

“Whisper of the Heart” trailer:

“WATATEN!: An Angel Has Flew to Me: Precious Friends” trailer:

©2022 “Whisper of the Heart” Production Committee

Alexandra Daddario will headline an upcoming drama, titled ‘Wishing You All the Best’