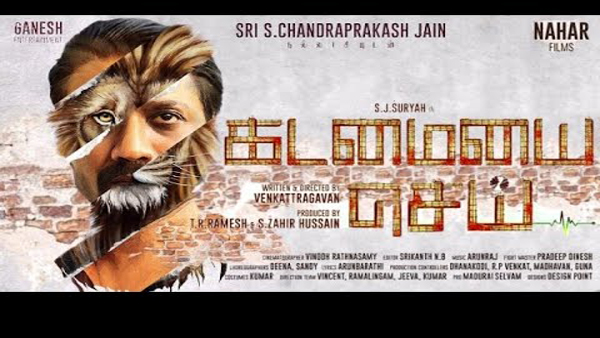 Actor SJ Suryah’s latest comedy-drama Kadamaiyai Sei hit the screens on August 12th. The film is written and directed by Venkatt Ragavan. The movie’s trailer has caught the interest of fans of the multi-talented actor and regular moviegoers with an interesting concept.

SJ Suryah played the role of a B.Tech civil engineering graduate with a gold medal, but comes face to face with no news of a vacancy. He is married and often hides his professional identity from his family until he finds a job as a caretaker for a secure community. He then encounters an accident that affects his brain and makes his body react violently. He goes in search of revenge.

People who have already seen the film have shared their views on the film. In the form of Tweets, they expressed their opinion on Kadamaiyai Sei. Check them out here:

Richard Mahesh
@mahesh_richard
#KadamaiyaiSei – The film immediately sinks into a weak zone. I wonder how SJ Suryah accepted this script, which in no way compliments his acting. Weak story, poor script. Looks like the director himself isn’t clear on his vision, whether it’s a comedy or a serious movie.

The film is produced by TR Ramesh and S Zahir Hussain under the banners of Ganesh Entertainment and Nahar Films. The film’s soundtrack is composed by Arun Raj and cinematography is handled by Vinoth Rathinasamy.

The film stars Yaashika Aanand in the female lead opposite SJ Suryah. Motta Rajendran, Charles Vinoth, Vincent Ashokan, Rajasimman, Seshu, and others are actors who played pivotal roles in the film.