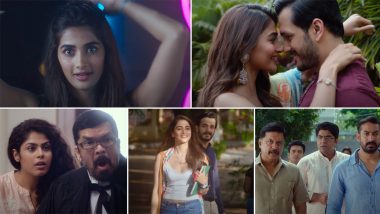 Finally, the trailer for Akhil Akkineni and Pooja Hegde’s upcoming film has been released. The story is based on the story of Harsha and Vibha.

He was introduced as such a romantic artist, and the story of the film revolves around the story of young NRI Harsha who had to face many hardships to find the true soul mate. She has finally found her soul mate and falls in love with the comedian Vibha.

In this we will see the romantic love chemistry of Harsha and Vibbha who will bond amazingly over a lot of things, but one problem is that their opinions are different in the concept of marriage. Now we have to wait and see whether Harsha will be able to handle things or not. This film will contain some hilarious events that can certainly cause laughter among the audience.

This film will feature Eesha Rebba, Faria Abdullah, Aamani, Murali Sharma, Vennela Kishore, Jayaprakash, Pragathi, Amit Tiwari and Posani Krishna Murali in the lead role. It was produced by Bommarillu Bhaskar and GA2 Pictures. This film was directed by Pradeesh Varma. On the music board, there is Gopi Sundar. It is reported that this filming and post-production work has been completed.

This film will be released in theaters on the 15the October 2021. There is also a new theatrical trailer revealed around 30e September.