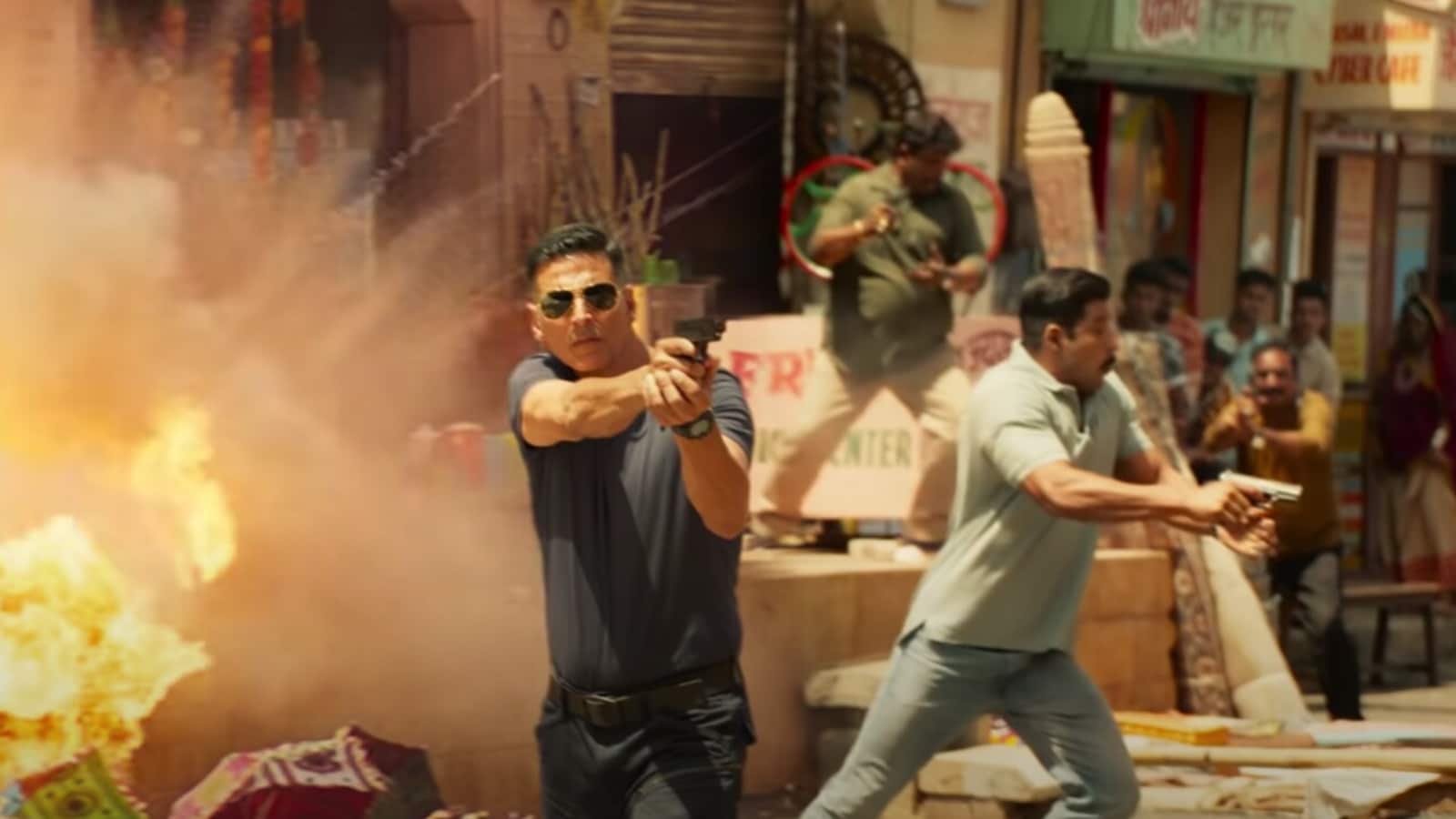 Released finally after 19 months, Sooryavanshi is nothing less than a celebration of mainstream Hindi cinema, bringing back whistles and cheers to a theater after a long time. Sooryavanshi is powered by trademark action from director Rohit Shetty and Akshay Kumar brings it in abundance.

Sooryavanshi is not a three hero movie like the posters and trailers might try to have you believe. It’s a full-length action movie by Akshay Kumar with special appearances from Ajay Devgn, who plays Singham, and Ranveer Singh, who plays Simmba, in the final 30 minutes. These 30 minutes are the film’s climax with its high octane action, exploding cars, stunning hand-held fight choreography taken to a new level, and the trio of action heroes in their best form.

Sooryavanshi begins after the 1993 bombings in Mumbai. 13 years later, as a terrorist group returns to service and plans another mission, DCP Veer Sooryavanshi (Akshay Kumar), the leader of the Mumbai counterterrorism squad, is given the task of finding their whereabouts. and stop the attacks.

With hardcore masala movies, it’s easy to assume that you can leave your brain at home and just enjoy the experience. But with a movie like Sooryavanshi, which features countless characters on screen one after another, you have to be alert and participate.

That being said, Sooryavanshi isn’t driven by a good script, nor does it have extraordinary suspense that could bring some biting moments. Still, it keeps you on edge for the sheer joy of watching this over-the-top action. Shetty chooses various elements – the romance between Sooryavanshi and his wife Riya (played by Katrina Kaif), their relationship with their son Aryan, her camaraderie with members of her ATS force – and weaves them together for a fulfilling climax.

While Devgn’s Singham was more intense and Ranveer’s Simmba was the more eccentric, Akshay’s Sooryavanshi is a mix of the two. He’s harsh in scenes that demand it, conjures up laughter in lighter scenes, or impresses with his shattering entry into the helicopter. Although in some places, Akshay struggled to stay in character and seemed perplexed by a busy storyline.

Sooryavanshi is quick, his second half is when all the tension builds up and things get more intriguing. Yunus Sajawal’s storyline is engaging and captivating but still a bit uneven. Even the medium dialogues of Farhad Samji, Sanchit Bendre and Vidhi Ghodgadnkar do not leave a lasting impact.

On the performance side, the film gets full marks. Katrina, with her better than before Hindi, is convincing as a loving wife and loving mother. Then there is a great support team, including co-commissioner Vikram Bedi (Javed Jaaferi) whose heavy voice adds gravity to the role he plays. Among the terrorists, the mastermind behind the explosions in Mumbai, Bilal (Kumud Mishra) and Lashker leader Omar Hafiz (Jackie Shroff) and his sons played by Abhimanyu Singh and Mrunal Jain, live their roles well. Gulshan Grover, Nikiten Dheer and Sikander Kher have small but crucial roles. Rohit, not wanting to dive into the gray area, makes sure his good men are too good and the bad ones don’t even try to look good.

In the midst of it all, recreating Tip Tip Barsa Pani could have been avoided altogether. Frankly, I couldn’t watch it beyond a few seconds. Or maybe we can’t imagine anyone other than Raveena Tandon in that yellow saree. Katrina tried a little too hard, but it didn’t quite work. As for Akshay, he clearly looked better with Raveena and maybe should have said no to this remake.

And once again, Rohit Shetty takes the opportunity to announce yet another outing. But right now go watch Sooryavanshi to make your Diwali even more special.