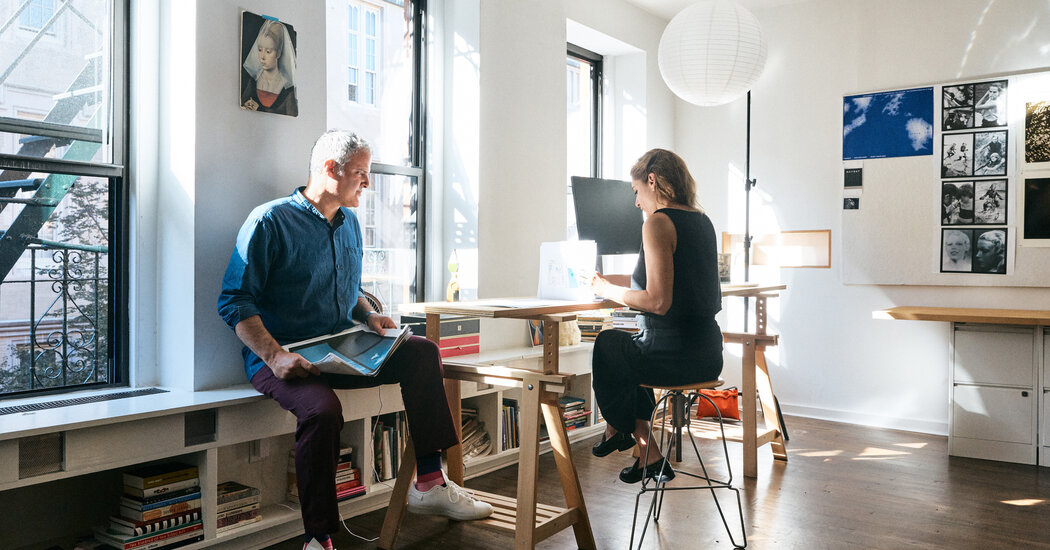 When cinematographer Sam Levy and writer and director Karen Cinorre, now married in their forties, first met – in a film class as undergraduates at Brown – he was struck by the fact that “she had read all these interesting texts on magic, mediums and optical tricks that you could play with the camera,” he says. “She was very studious and disciplined about it, and I liked it about her. “

“I was a really curious researcher,” confirms Cinorre, who first studied semiotics, physics and dance, but eventually landed in cinema. “I realized,” she says, “that the cinema palette contains so much of what I love – science, optics, movement, sound,” which together can create an alchemy that is clean. Not that she is actively thinking about all of these things as she goes. “For me, you just do it – I’m trying to express something almost in the subconscious,” she says. “It’s like having a dowsing wand, looking for a way to express how you feel.”

Levy, she says, who turned to the camera in high school, has a different and more deliberate approach – “he takes the film away from its most essential and powerful parts” – something that was obvious and fascinating to her, right from the start. The couple kept in touch after that first class together, which was taught by avant-garde filmmaker and artist Leslie Thornton, and their love story blossomed soon after graduating and moving to New York. They married in 2000, as they were starting to build their respective careers. Cinorre edited and produced for Thornton; multimedia installations produced and organized; films created for opera productions; and worked as a set decorator and stylist, notably for the experimental short film series “Green Porno” by Isabella Rossellini (2008), in which Cinorre also appears as a snail in love. All the while, she was writing and directing her own short films. One of them, “Plume” (2010), centers on a young boy lost in a sandstorm who is rescued by an ostrich, which leaves him trapped between the human and animal realms. “My artistic inclinations are for mysterious things – I’m interested in the land of the sublime,” she says.

At the same time, Levy was making a name for himself. He shot music videos for Beck and Vampire Weekend and became a frequent collaborator with Noah Baumbach and Greta Gerwig, as the cinematographer on Baumbach’s “Frances Ha” (2012), shot entirely in black and white, and “ While We’re Young “(2015) and, later, for Gerwig’s” Lady Bird “(2017). His lean, naturalistic approach belies the meticulous attention to detail that gives the films he works a rich, lived-in aesthetic. Levy has also shot almost all of Cinorre’s shorts, and the couple sometimes ended up on the same set for other productions (as was the case with ‘Green Porno’). the set together, spending 15 hours a day together doing things, ”says Levy.“ When I got a feature film for someone else and left the house, it only reinforced the idea that we should do it together. “

In 2018, after an idea for Cinorre that had been circulating for over a decade took shape – “Sam, who had seen the script in progress, was the one who pointed out that this should be a feature film,” Cinorre says. – they got their chance. The story – of what would become “Mayday,” which stars Grace Van Patten, Mia Goth, Havana Rose Liu and Juliette Lewis and hits theaters and all major video-on-demand platforms on Friday – follows Ana ( Van Patten), a put-on a young waitress transported to a lush, sparsely populated island in another dream world. A war is underway, but she finds refuge with a group of young women led by the seemingly unfazed Marsha (Goth). Soon, Ana learns, the women are determined to take revenge on all the men they attract to their death, often by posing as damsels in distress via radio transmissions. Over time, however, the feminist revenge fantasy gives way to something else, as Ana comes to see herself and her previous life in a different light.

Cinorre cites “Alice’s Adventures in Wonderland” (1865), “The Wizard of Oz” (1939) and the ancient myth of the mermaids as points of reference for the story, which she says ” looked a bit like a fugue ”. To understand the overall aesthetic of the film, which has an appropriate vaporous and hypnotic quality, the couple sought visual inspiration together. They went to live dance performances, including those by the Belgian Rosas Troupe and the Israeli Batsheva Company, to help achieve a sense of grace and kineticism in the film (which has a dark and playful musical number in which Ana dances with a cadre of spry soldiers). The couple also scoured the shelves of Dashwood Books in Manhattan, looking for images of women in action, which have proven difficult to find. Still, “a lot of Japanese photographers, like Rinko Kawauchi, have spoken to us – something about mystery and color,” says Levy, who says his goal for “Mayday” was “to defy gravity.”

“It’s a great movie for a feature debut – it took a lot of muscle to take off, and it was reassuring to have someone so encouraging,” Cinorre said of his collaboration with Levy, which turned out to be as natural as the two of them. expected. “What I always try to develop with a director is this shortcut to communication and visual language,” says Levy. “You have to kind of become the same person – your brains have to merge and you finish each other’s sentences. It was something that he and Cinorre could already do, although both were careful to maintain at least some boundaries between work and life. “We take what we do so seriously that we shouldn’t take ourselves too seriously, ”says Levy. “We’re playful and silly and silly with each other, so we can bring that energy to the set, which makes the process of making a movie a real joy.”